You are both braver men than I am, Gunga Din! That's one heck of an adventure, to be sure. I think I'll stay below and take pictures. *noddle* 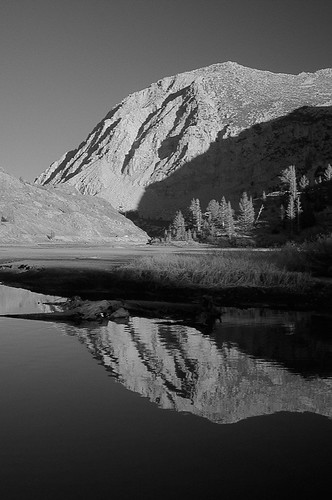 I can say that the Ellery Lake campgrounds are very pleasant, if a bit cheek-by-jowl for my back-country tastes. Sunset is the time to take pictures here, IMO. It's a landscape that lends itself very well to monochromatic images, too.

I'll have a pot of coffee waiting in the campgrounds, and a nice fire going.
Edie

Nice black and white, but we're not both men!

The above info is great. We did Ellery Bowl on Saturday, July 1 2006 and had a great time. The snow was still terrific, albeit there were lots of sun cups and some of those interesting cones caused by rocks melting their way down into the snow. Super fast skiing would be discouraged since some of those cones are deep and come up unexpectedly (they look like sun cups until you are nearly on top of them).

We hiked up to the choke just below the cornice. We stopped there for two reasons. First, some of our party didn't have crampons/ice axes and getting up from there would have been challenging without equipment. Second, and more importantly, the cornice looked like it could fall at any time and would have wiped us out had we been anywhere near the choke at the time. Our suspicions were confirmed on Monday when two friends went back via Tioga Lake / Dana Plateau and entered from the top. The cornice is indeed pulling away and will fall soon. Be careful if hiking up before this happens. Its a very big cornice and will drop a lot of heavy snow and rocks on anyone in its path.

We hiked up lookers right from the bottom. In retrospect, lookers left would have been a better choice for two reasons. First, it would have provided firmer snow since it gets its sun later in the day. Second, there was a fair amount of rockfall activity on the right (west?) side. We watched a television-sized boulder tumble down across the snow. Being in its path would not have been pleasant.

The snow is melting fast so get up there soon. Oh, and there are lots of fish in the lake.

I'm glad for the above comment and I probably should have said more about the cornices in the original note.

We were hesitant to go to the top and opted to go for it through a gap in the cornices. Since this is a bowl, though, the slopes converge and the cornices that are off the the side a bit could still come down on your line if you're not careful.

I would under a lot of circumstances consider hucking the cornice to drop in, but in fact the cornices were cracked about 20 feet back and we did not dare to get within 30 feet of the edge except in the spots where the cornices had already collapsed entirely. There were a couple of big chunks that looked ready to go and you and can see one in the thumbnail photo that accompanies the article.

One final note that neither of us mentioned. There are some watercourses in Ellery Bowl and as the season progresses, skiers should also watch for collapsing snow bridges.

Yeah, that all makes it sound like some sort of dangerous, extreme outing, which it isn't, but it is a steep slope with cornice and rockfall danger and some snowbridges, so you should know what you're doing and be cautious enough to make it back another day!