Hite Cove is indeed beautiful. I had the good luck of visiting it for the first time just before the rockslide and took lots of pictures. Here's one of the "languishing mining equipment": 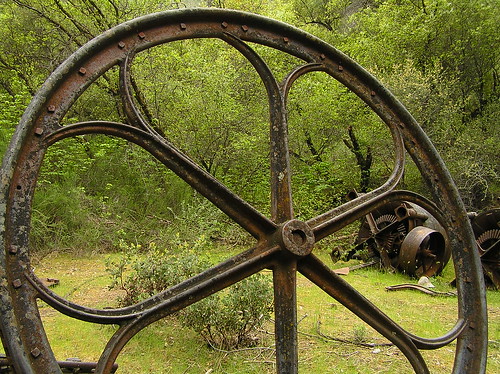 Edie, You've been busy! I just looked at Ambitious Wench Photos and it looks like you've put up a couple hundred fantastic images in just the past week. Good work!

PS, for those who don't know it, Loyd is the guy behind YosemiteBlog.com

Nice trail down to the river, some wildflowers and a nice view, but after that ... there is major downfall from this Spring's storms. You will have to detour, crawl, climb over large trees and bush whack the rest of the trail. Oh, and did I mention you will be going thru an old growth poison oak forest. Poison oak everywhere, even overhead, I'm still scratching. Of course the good for nothing but collecting fees USFS doesn't mention any of this on their current trail conditions page.

Actually, that was the situation a couple of weeks ago when Theresa went, but two people we know have been since then and the trail has been all cleared all the way to the old mining town itself. So realistically, it was only in that state of affairs for a few weeks, and with all the stuff we've had going on here with the storms, the power outages and the threatened government shutdown, I'm amazed that it got cleared so soon.